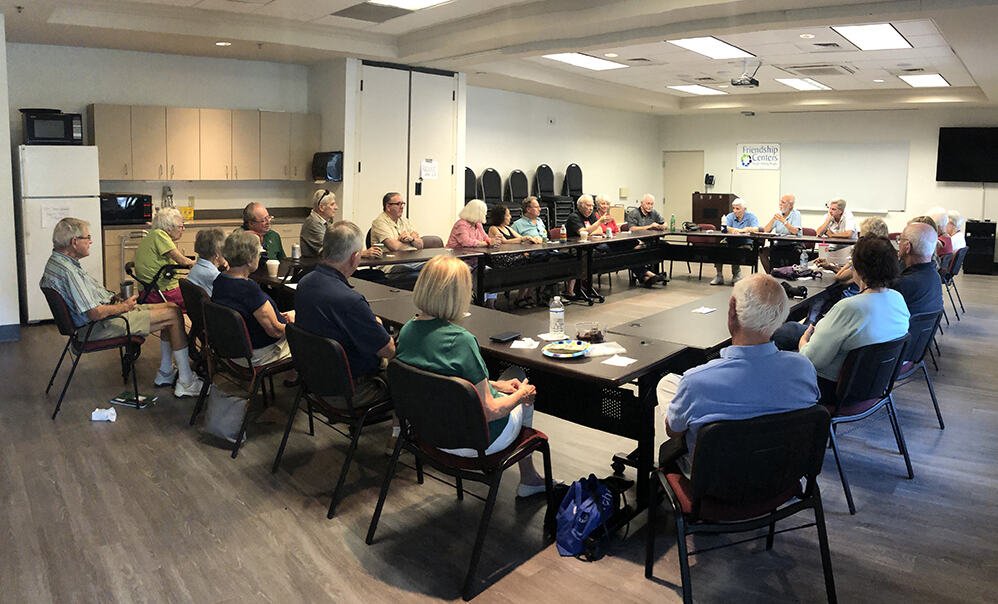 A former attorney, Michael was used to going by the book – literally. But after he retired, he realized that there were ways he could use his knowledge to give back to the community.

First he started giving volunteer legal counsel to seniors in need at Senior Friendship Centers. Next, he started a discussion group called “What’s Happening” on Fridays in the center. Now participants from that group have asked him to start a new discussion group – the “Aging Rebels,” which will meet each Tuesday in August from 1:30-3:00 p.m. in the Wellman Room in Sarasota.

While “What’s Happening” is mostly a discussion about politics and what’s going on in the world, the “Aging Rebels” group will tackle topics such as loneliness, finances, physical and mental limitations, responsibilities, fear of aging, fear of dying and anything having to do with the aging process.

“Aging is inevitable for all of us,” he says. “You don’t have to be 90 to worry about aging. As we age more questions come to the surface – ‘Why am I here?’ ‘What is my purpose?’”

Michael began asking those questions about seven years ago when his wife Rhoda was diagnosed with dementia. Once full of life and involved in the community, he noticed her becoming withdrawn and quiet.

“She would stare at the TV not knowing what was on,” he says. “She became embarrassed when she would forget her words, so she didn’t talk as much. She had been so vital and it was hard for me to watch her retreat inward.”

Michael brought Rhoda to The Living Room Adult Day Service at Senior Friendship Centers so that she could socialize and do purposeful activities with others who had medical challenges and/or dementia related diseases.

“My wife benefitted so greatly from exposure to people,” he says. “When she got together with the group they really reached out for one another and connected. She looked forward to going and began to communicate more. It was so much better than sitting in front of the TV.”

While Rhoda was at The Living Room, Michael looked for activities to take care of himself. He attended support groups at The Caregiving Resource Center and provided legal advice at the Activity Center. He also started “What’s Happening” with five men he ate lunch with. Five years later, the program has grown to around 45 people, with about 30 showing up at each discussion.

“People are able to vent and express their opinions and feelings in a structured way,” he says. “They are not interested in listening to a lecture, they want to talk. More important than the discussion is the feeling of camaraderie that people have for each other. We may not agree, but we’re respectful and civilized.”

Two women from that group recently approached Michael and asked if he would start a discussion group about the aging process, and “Aging Rebels” was formed.

“The concerns are multi-faceted as we all charter new territory,” he says. “The topics will be introduced by our facilitator, Nancy Schlossberg, and will be centered around the aging process with spinoffs on wellness and relationships.”

The motto of Senior Friendship Centers is “People Helping People,” and the vision of Brother Geenen is mirrored in Michael’s experience.

“It’s so important to be a part of a community as we age,” he says. “Being involved in giving back is part of the aging process for me.”

WHEN
The pilot program will meet every Tuesday in August from 1:30-3 p.m. Future dates TBD based on popularity.

WHO
The discussion will be facilitated by Professor Emerita Dr. Nancy K. Schlossberg, author, speaker and motivator. As a professor of counseling, Nancy’s mission is to help people cope creatively with the ups and downs of life. She writes self-help books, lectures at speaking engagements and conferences worldwide, and runs workshops on managing change.