The Effect of Loneliness on Seniors 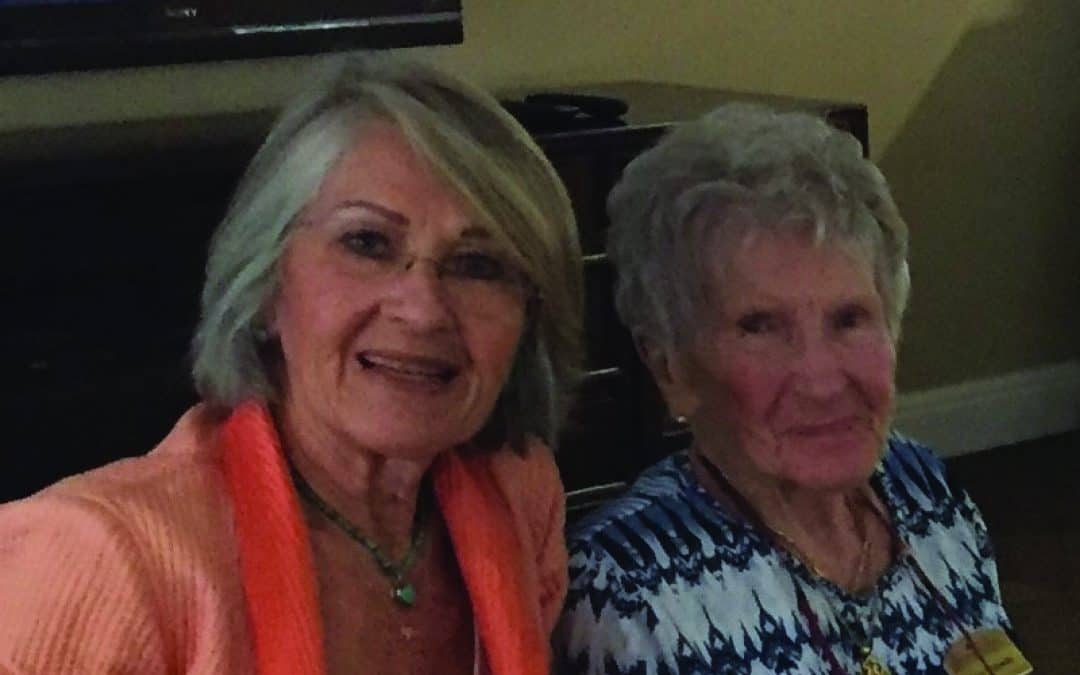 Forward: In October, the funeral of veteran Edward Pearson at Sarasota National Cemetery received national attention when the funeral home printed that he had no immediate family to attend his funeral. More than 4,000 people showed up at the memorial service, highlighting the public’s willingness to help others in need. Sadly, there are tens of thousands of seniors in Sarasota County who live alone, and loneliness is an epidemic amongst the elderly. In fact, older adults who are alone have a 59 percent greater risk of mental and physical decline. In this article, Senior Friendship Centers Board Member Christine Schlesinger, APRN, CDE tells the story of how loneliness affected her mother, and how friendship made all the difference.

While it’s fairly obvious that loneliness can lead to emotional illness like depression, none of us in my mother’s circle of family, friends and professionals recognized the profound effect that loneliness was having on her physical and cognitive health as she approached her 94th birthday.

When she was younger, my mom was an excellent cook, baker and hostess. Now, preparing a meal became overwhelming. Moderate vascular dementia was reducing her ability to live independently. As a life long knitter, she had found purpose in knitting shawls for homeless veterans at my former VA clinic. However, she failed at even this simple repetitive task. She was short of breath, lost her appetite and suffered from swollen legs and apathy. She was sleeping at least 18 hours a day. Mom had low blood pressure and irregular and fast heartbeat. The usual medical management of her condition was impaired by a history of falls. The cardiologist felt that hospice was appropriate; so, she was enrolled.

As a geriatric nurse practitioner, I could see that mom’s days seemed numbered. I sounded the alarm among our family; children and grandchildren flew in to say goodbye. Those of us who live close by were with her every day; she was never left alone. It is a known observation that people often die after reaching milestones like a birthday. Mom had her 94th birthday and she was still alive a few months later. Then an opportunity came for an apartment in the assisted living facility (ALF) in her retirement community. We agonized wondering if we should stress her with a move, especially if she were really dying. I consulted friends and other professionals and nearly everybody said, “do it.” Everyone said, “It will help you and it will help her.” So we proceeded.

Mom was still in hospice when she moved to ALF and the first month was pretty rocky for everyone. Slowly she got used to the staff and the routine and they got used to her. She stabilized. By the second month, the hospice discharged her because she was no longer declining. In fact, she was beginning to thrive. She no longer needed oxygen. She started using her walker more and wheelchair less. Mom was more clearheaded, able to knit effectively, enjoy music including her favorite: the weekly Lawrence Welk show.

As a clinician, I was puzzled. What had caused the improvement in her physical health and cognition when there had been no medical intervention? After much research and analysis of past signs and symptoms, I realized that she was no longer lonely. She experienced belonging again. Mom had a readymade community where people responded to her naturally warm and welcoming personality. Mom no longer lived according to her own erratic schedule, but had a routine. Her body could resume its natural circadian rhythms. Hormones affecting so much of our physical health and well-being were being released at regular intervals. Mom was no longer self-medicating her loneliness and boredom (which she categorically denied) with “highballs” or wine. Alcohol increased her confusion but also may have adversely affected her heart rhythm.

Hindsight reveals that over the last 5 years, she would complain more often that she missed my dad. I don’t remember her making this statement very often during the intervening years after her bereavement when she was very socially active and purposeful. This was, I now believe, a proxy statement for “I’m lonely.” Mom had many friends but as she became sloppier in her person and more forgetful, even close friends who themselves were aging sought her company less. It was also during these last 5 years that she donated to every charity that sent her a request. One month she wrote nearly 200 checks for “charity.” Mom also talked to every solicitation telephone caller and shared credit card information with them in spite of MANY admonitions from us. She opened the door to her stand-alone home to anyone who rang the doorbell. As I look back, I believe that she was seeking purpose and human belonging.

We were naturally concerned about these potentially dangerous behaviors. We convinced mom to move to a retirement community where she could have her own apartment and participate in the many outings and activities. She connected with the staff and there were warm and caring exchanges. There was purpose to the interactions; that brightened her day. However, mom never connected with her fellow residents. This was likely because of poor hearing and memory loss; so she was alone and lonely much of the time.

An environment like Senior Friendship Centers where camaraderie flourishes, or a daycare center or good ALF can mitigate loneliness. Nearly all human beings crave socialization. We’re wired that way. But especially for a naturally social person, living in a community where there is a sense of belonging is exceedingly important.

Of course, not every assisted care facility is as therapeutic as the one that my mother lived in. Most families like ours are reluctant to remove elders from their own homes because everybody says “I want to die in my own home.” But the loneliness that exists in those homes can be deadly.

I encourage families to facilitate peer socialization, even if your loved one says “I’m not ready for that” or “Not yet.” Take your mom or dad, spend some time with them at the activity or facility. You may be providing them with the gift of belonging and even enhanced health. – Christine Schlesinger, APRN, CDE

For more information about Senior Friendship Centers, call us at (941) 556-556-2122 or visit us at friendshipcenters.org.